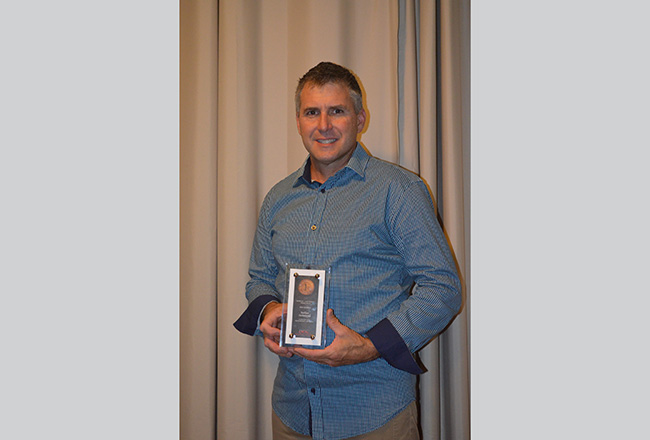 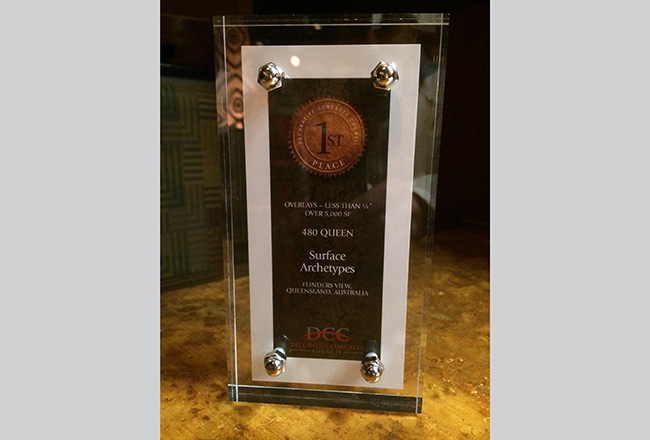 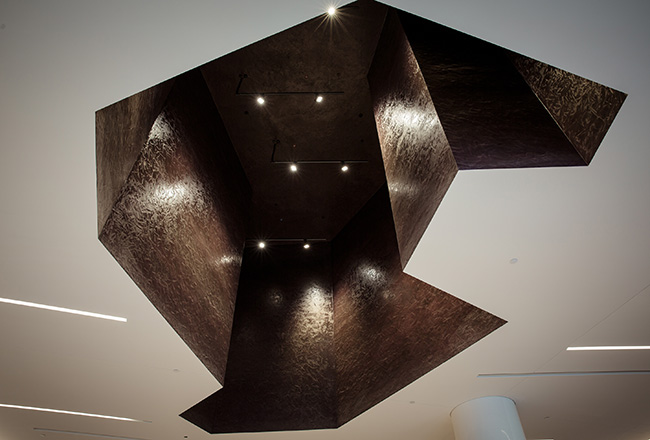 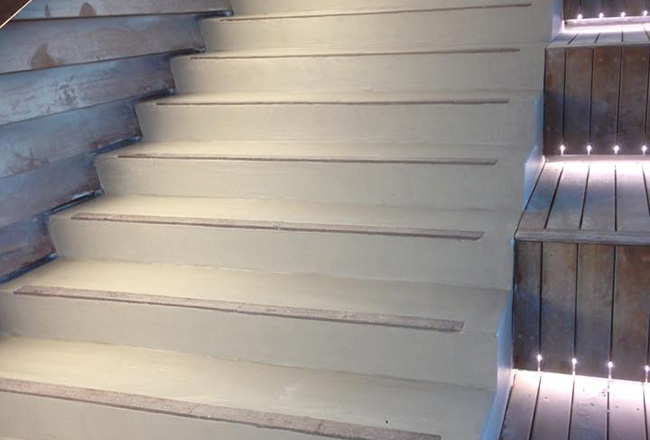 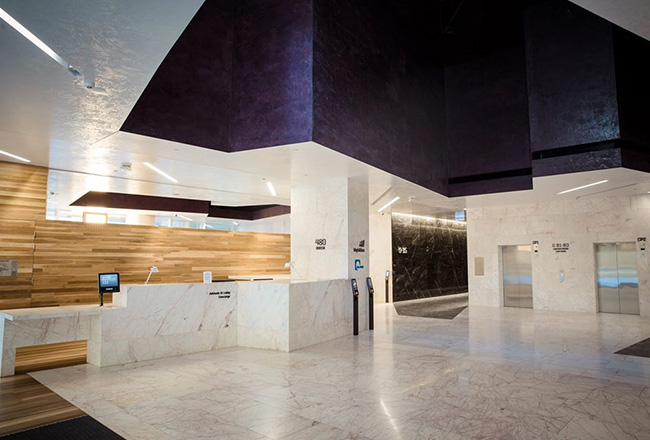 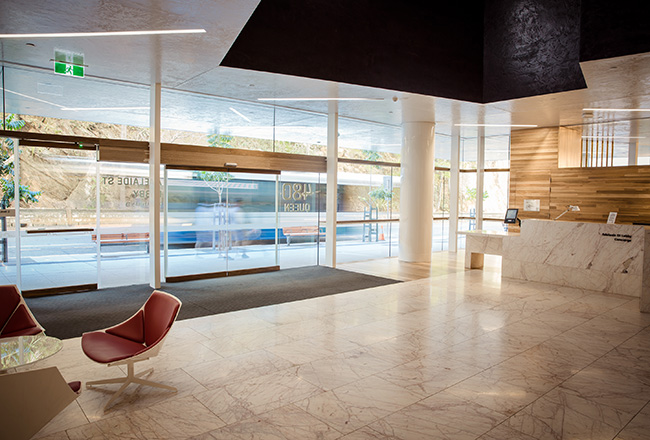 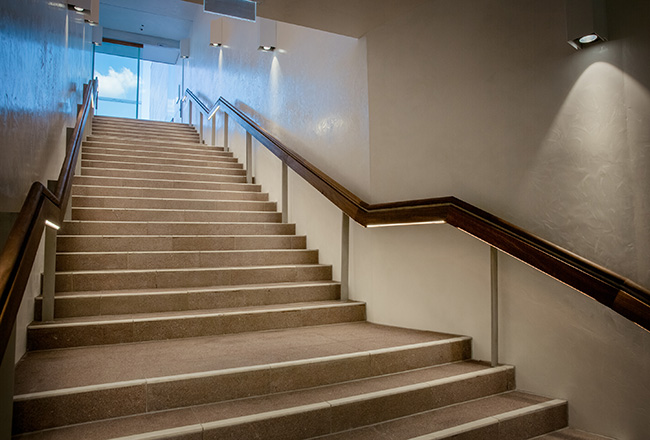 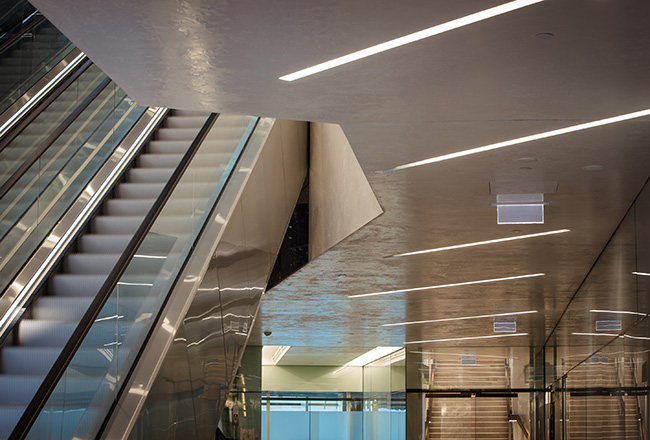 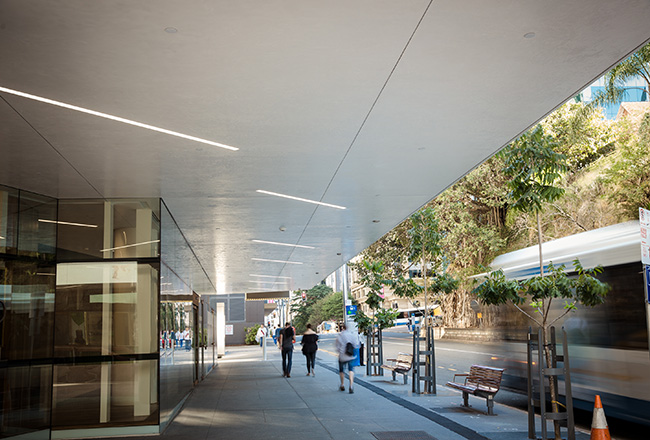 In November 2015 Surface Archetypes was contracted to supply and install 3500 sqm (37670 sq ft) of Ardex panDOMO W1 decorative plaster to walls and ceilings for the ‘480 Queen’ project. The 480 Queen project is a 32 story office tower in Brisbane, Queensland, Australia which we received an award from the Decorative Concrete Council – see the award page here. The project was constructed by Grocon, for the Dexus Property Group. 480 Queen has a 6-star Green Star rating target (As designed achieved) and a 5 star NABERS Energy target.

The areas to be covered with the panDOMO range from high level ceilings to stair walls to light voids. At the time of contract signing, this was the largest panDOMO W1 project on a global scale. Never before had anyone installed this quantity of Ardex panDOMO W1 in a single project. For us at Surface Archetypes, it was a chance to showcase our expertise to the eyes of the design world.

Architects, Donovan Hill BVN, had never seen the Ardex W1 prior to this application. We went through a rigorous sampling period showing colours and styles. Colours from the Dulux paint range were given to us to match.  Countless hours were spent creating these colour samples to achieve a finish that was pleasing to the eye of the client.

Once on site to begin, the logistics of maintaining colour and effect across the 3500 sqm was going to be a huge task. At the start, there were only 2 trowel hands applying the W1, so it was relatively easy to achieve consistency. At the height of the installation, we had 9 trowel hands applying the W1 in adjacent areas. This was by far the most difficult aspect of the installation in ensuring that the pattern effect did not differ from one area to the next.

Andrew Doré from Surface Archetypes says, ‘I developed many grey hairs and tested the patience of myself and the trowels hands because this project was going to be viewed by many across the design industry, and it had to be faultless. The trowel hands had to accept that I was going to be relentless in my quality control mode’.

Fabian Morgan, Chief Operating Officer and General Manager at ARDEX Australia says, ‘ this is another great innovative use of Ardex panDOMO W1.’

So, from November 2015 through to May 2016, we toiled away at this site. The final finished results were fantastic. We received some very exciting feedback from the builder, architect and property owner. This achievement is something that we will savour for many years, as it is an icon for us and Ardex alike.